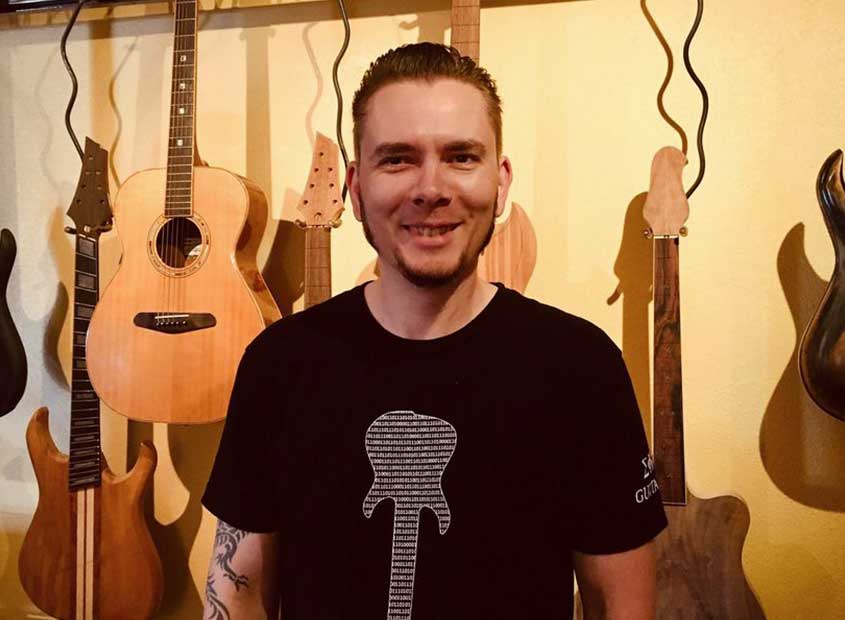 Steven Davis graduated from Roberto-Venn’s Spring 2009 class. He stayed on with the school as a shop apprentice for the Fall 2009 session, and then he was asked to join the team as a workshop assistant. Three years later, he completed the Roberto-Venn instructor training program, and became a full-fledged instructor in 2013. In 2018, Steven Davis became the new head of the electric guitar program. He builds unique guitars and basses under the name EIR Guitars. One of Steven’s goals was to design and build an 8-string guitar for one of his favorite guitar players, Marten Hagstrom of the Swedish progressive metal band Meshuggah, and he used the unique body shape he designed for Marten to go on to build for Vildhjarta – another Swedish progressive metal band. Steven often employs a sleek, “classy metal” look in black and white on his guitars and favors clean and crisp lines and simple elegance. EIR Guitars’ “Thall” Bass, a 5-string that can handle G standard tuning and below that was designed in collaboration with Johan of Vildhjarta to explore low frequencies, has been featured as the “Bass of the Week” on BestBassGear.com.

Steven Davis was recently recognized with a Master Luthier certificate from Roberto-Venn honoring his 10+ years of outstanding instruction and high-quality craftsmanship, artistry, creativity, and dedication.