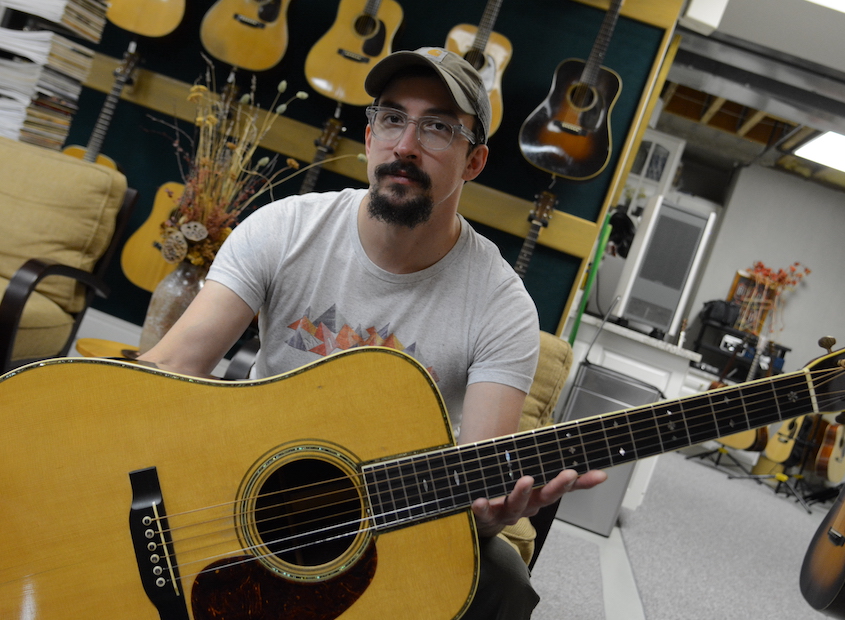 In 2014, the lutherie stars aligned when R-V Grad Ben Maschal and Wes Lambe joined forces. They founded Pre-War Guitars Co. in an attempt to capture the look, tone, and feel of the vintage Martins they both loved. Pre-War was the first company to debut a distressed finish acoustic guitar. Using old-world craftsmanship and materials, along with torrefied spruce and other modern tricks, they build some of the most sought after recreations of vintage guitars from the late ‘30s. They build about 150 guitars a year, have a 2 year waitlist, and are proud to have sold guitars to their musical heroes, from David Grisman to Tommy Emmanuel, Jackson Browne to Joe Henry and David Grier, Molly Tuttle, The Steep Canyon Rangers, Charlie Hunter, The Brothers Osbourne, Mandolin Orange, and more.

Ben got hooked on the sound of acoustic instruments when he went to his first Merlefest at 13. As a teenager, he sought out vintage instruments by roaming the vendor tents at bluegrass festivals and lurking the message boards at MandolinCafe and the list-serv CoMando.

Inspired by the collectors and luthiers he met, including Olin Davis, Clermon Ward, Harry West, and Tom Isenhour, Ben moved to Arizona to attend the Roberto-Venn School of Luthiery in 2001. After graduation, Ben moved back to his hometown of Charlotte and ran a guitar repair business, building custom instruments in a garage shop at home. He also honed his woodworking skills building high end cabinetry (and occasionally pizza) to pay the bills.

In 2010, he moved to Siler City to join the North Carolina Arts Incubator and resume life as a full-time luthier. After a chance encounter at the local coffee shop with international mandolin master and vintage instrument guru Tony Williamson, Ben went to work at Mandolin Central, affording him a real opportunity to deeply study the finest vintage instruments on the planet.

Ben lives with his wife Marianne and their 3 kids in Chatham County, NC.