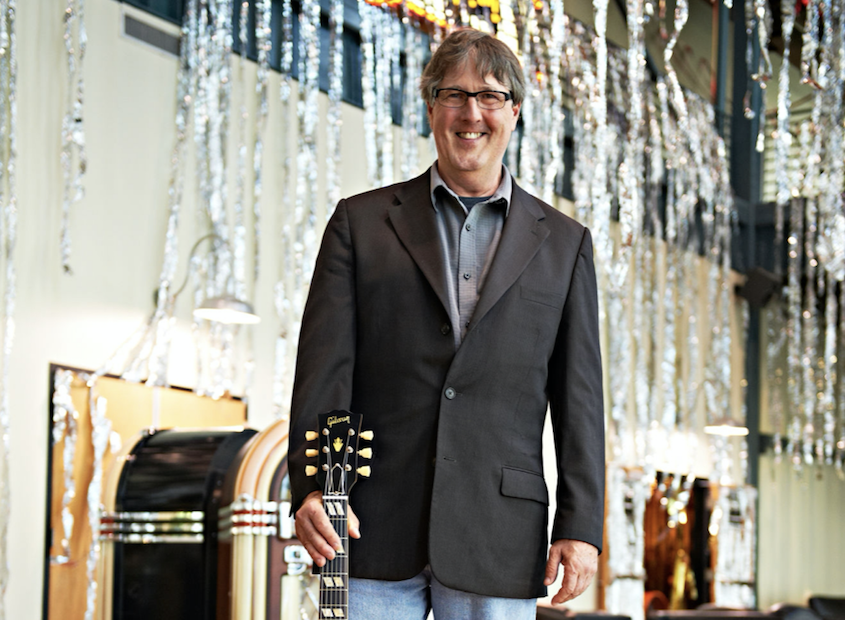 Getting ready for Gibson

In 1978, Mike attended Roberto-Venn School of Luthiery. This school continues teaching and sending talented luthiers into the field with a number of graduates currently employed at Gibson.

Mike followed school with a year at Sho-Bud, learning set up with some great Opry musicians. He was able to start his professional career building a few Sho- Bros. And, as it turned out, he built the very last Grammer Guitar in 1979.

From there, Mike repaired and restored guitars for George Gruhn. It was those years that solidified his love for fine vintage guitars. George was the top vintage store in the country, and Mike felt fortunate to be in the midst of a steady supply of the finest guitars, mandolins and banjos ever made. It was also there that an amazing Luthier, Matt Klein, taught him a great deal.

Norlin Corporation had just closed its doors on Gibson Kalamazoo and moved all operations to Nashville when Mike started working at Gibson on August 06, 1984. He, and a few other luthiers from George’s Shop, started building custom Gibson guitars and developing new models. During the early years, he had the opportunity to work with Earl Scruggs and re-necked a Granada for him.

For the next 14 years Mike moved from designing and building guitars to Supervision, Artist Relations and then Product Management.

The highlight of his career seemed to revolve around Chet Atkins. He built a few guitars for him, managed his model line, and just hung out, especially in the last few years.

A great part of the Chet friendship was the Saturday morning Cracker Barrell breakfast club. Every Saturday at 8:00 AM, at the same round table in the back, there was a core group of music industry guys. Depending on who was in town recording, we always had guests, bad jokes, and occasional great stories. It was at that breakfast one morning that Chet, Scotty Moore, and DJ Fontana were disagreeing about where they put the speaker to get the echo when they recorded “Heartbreak Hotel” at Studio B. My eggs got cold……three legends bickering like good natured children over how they made history with Elvis. Another night, at dinner with Scotty and Gail (and of course Beth!), Gail confirmed that Chet was right, it was under the stairs.

Along with eating breakfast, Mike did build some guitars. During that time, Gibson launched the LP Studio Light, The Nouveau series for Epiphone, and a variety of acoustic Chet’s. Probably the most noteworthy was the Chet Studio, based on Kirk Sand’s beautiful model.

For the next 10 years Mike bounced around from Custom Shop Product Manager to Artist Relations and several places in between.

While working with Epiphone, again as their Acoustic Product Manager he oversaw the development of the Masterbilt Acoustic Series. The key players in that project are still on Epiphones Product Development team and producing amazing guitars!

Next Mike was extremely fortunate to be invited to work with the Acoustic team in Bozeman for a couple of years. That team is still taking our breath away with acoustics that look, play, and sound better and better!

During this time Mike did also spend a couple of years in a factory in China for Epiphone.

The next 8 or so years were spent in Memphis with a wonderful team of Luthiers developing new ES models and bringing back some of the greats from the ‘50’s and 60’s.

That brings us to 2018 until present. Gibson has undergone another transition and has a new leadership team. It is led by guitar guys passionate about the brand who pour their heart and souls into it. Gibson has a bright future!

Mike retired with a smile on December 18th, 2020 to kick back with Beth and wrap up a few overdue guitar projects from the past 40 years.